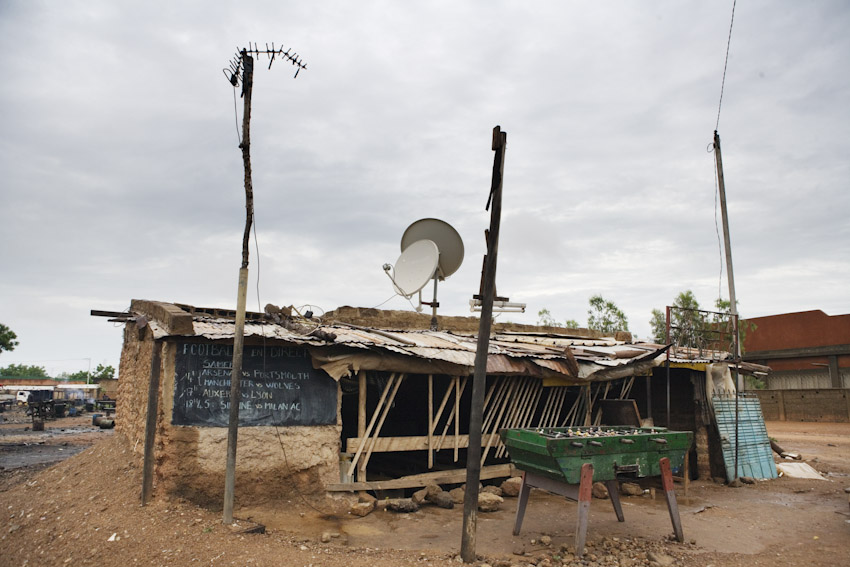 Photographer Jessica Hilltout brings another view to 'the beautiful game'

Jessica Hilltout, photographer, started her journey into capturing a particular type of beauty in Africa 12 years ago, a long time before the Fédération International de Football Association (FIFA) World Cup took place there in South Africa, 2010. When she started the trip, in order to break away from the restraints of commercial photography, she was unaware that this recurring world event, now again taking place this year in Rio, Brazil, would shape her life inextricably and that her work, starkly juxtaposed to this carnival of the media world, would also repeatedly stand in its limelight.

Jessica Hilltout’s virgin voyage, in search of a world beyond the commercial, began in 2002 in a Jeep that left from Europe and took her and a friend all the way to Mongolia and Africa over 15 months. This voyage focused on gaining life experience and only a few photographic images were its ‘working’ result. It gave her, what she terms, a “gestation period” sewing the seeds for a perspective that she further developed in Madagascar. For this 5-month trip, through this African island of magic, her camera started to become a part of the experience again. “It is there in Madagascar that my own language began to develop concentrating on what I call ‘the beauty of imperfection’. My  own regard focused on details, these tiny things, human or not, that constitute  all the richness of this continent. These fragile and imperfect things that emerge that are not smothered by the notion of possession,” says Hilltout.

As much as Hilltout’s photographic works from Madagascar helped her define her path for artistic expression, gallery doors nonetheless remained closed to this little known, UK trained and until this point commercial, Belgian photographer. So it was in 2008 that her father Mark Hilltout, a football fan, ex-advertising executive, resident of South Africa and ardent lover of the continent, suggested she go in search of this beauty in the grassroots football that was played all over the continent, particularly in relation to the upcoming FIFA World Cup in Africa in 2010. This resulted in a project entitled ‘AMEN’, which has included exhibitions and talks from Europe to South Africa, to North and South America and a same titled book – and all this in and out of the shadow of one of the most televised sporting events in history.

A JOURNEY INTO DETAILS – AMEN

After completing the trip to Madagascar, Hilltout’s continued journey into the detailed, often overlooked beauty of things via a camera lens happened in 2009 over 9 months, 20,000 kilometers and through 10 African countries in its southern and western regions. This time more specifically in search of grassroots football and its connate beauty, Hilltout took along a Hasselblad camera with only one 80 mm lens. Taking this one lens only was on purpose as it forced her to get in close to her subjects and obliged her to establish trust and a certain amount of intimacy within the communities she visited, before she even contemplated getting out her camera. “For the feet portraits I would literally lie in the dust directly in front of their toes to get the angle I wanted – they laughed at me a lot,” says Hilltout “but to get there it took a few days of staying in their villages and talking to them about the fact that the heart of my project was their spirit and love of football and not their poverty.”

Her self-published and funded book, encompassing her photographic journey, was released in 2010 and was followed by intense media attention and exhibitions and talks in Belgium and South Africa. In February 2013 her work was also featured in National Geographic magazine. “With this I discovered the power of the media. At the height of the media interest in 2010, particularly with one New York Times article, I was dealing with 50 e-mail inquiries an hour – for the book and about the project. The same thing happened when the National Geographic piece came out,” says Hilltout. And now with the 2014 FIFA World Cup Brazil, new interest and exhibitions are extending the project’s reach even further and to new continents.

Her work has now touched a group of Brazilian students in Rio, particularly in relation to the current public reaction and unrest in the country to the event. For, in a similar way to South Africa, the event highlights the enormous financial gulf between the people playing football everyday across the country and their often unmet social needs and the exorbitant stadiums being built with public funds especially for the event, in order to ultimately display FIFA’s billion dollar images worldwide.

Alice Noujaim, Leonardo Aucar and Maria Elisa Assy from the Pontifical Catholic University of Rio found Hilltout’s work on an Internet search for the ‘real’ everyday football that was so inherent to their culture. Students of the Social Communications Department, their professor Marcos Barbato – as a part of his Laboratory of Publicity course – asked them to conceptualise and develop an event that, as in previous years, would happen at the university.

Only this year it was different – this year it needed to be about football and this year the student’s project would also be exhibited at Parque de Bola, an event staged at the Brazilian Jockey Club from June 12 to July 13 in line with the World Cup. As put on the website it is a “unique space, next to the Botanical Garden, under the arms of Cristo Redentor (Christ the Redeemer) and next to Lagoa Rodrigo de Freitas, Parque da Bola Rio will be composed of the following areas: Exhibition – Media Centre – VIPs Lounges – The Village – Entertainment – Food Services – Hospitality”. The more cynical among us may describe it as a World Cup playground for Rio’s better off with a main stage that houses LED screens for “the transmission of games” and comfortable seating for up to 4,000. By no design of her own, Hilltout’s work finds its place again among the extravagance of the World Cup – an event that draws an estimated 350 million live television viewers across the world.

LONG TENTICLES OF THE TELEVISED

Ironically, in this context, Hilltout’s work also points to the symbiosis between wealth and poverty and the position of media and television in the mix. For just as the social questions raised are similar for the world cup across the two continents, so too is the fact that televised images of the football matches fuel the love of the game for rich and poor populations alike in both Africa and Latin America. This too is highlighted in Hilltout’s images. In stark contrast to Parque de Bola’ comfortable 4,000 seats at the Polo Club, Lotte Cinema, featured in her book, is a ramshackle hut seating 60, built of earth, recycled wood and stones in what could be seen as a poverty stricken wasteland. Hilltout explains that the Africans she visited would save the little they had to be able to watch as many games as they could in locations like Lotte Cinema. “They follow all the international games. They know who is playing when and it will be no different for the Rio World Cup.”

Similarly in Brazil, according to the Brazilian Institute of Geography and Statistic’s most recent numbers, 97,2% of Brazilian houses had a television in 2012. This social attachment to the televised and the often rising-star story the images reflect, of favela players becoming super stars, permeates in the hopes of the people playing football across the two continents – a similar theme in Hilltout’s work and another draw card for the Rio student team.

POVERTY NOT THE POINT

But it is this reflection of poverty upon which the artist resists dwelling. “It was important to me that it wasn’t about money or the lack of it. I hate the poverty cliché that my work can fall into. In French we say ‘la vraie richesse est celle que l’on ne mesure pas’ and that’s the wealth I wanted to capture. The real wealth that’s inside of each of us, that can’t be measured. That for me is very clear in Africa and what my work is about,” says Hilltout. In this way Hilltout firmly asserts that it is not the sporting event and questions on disparity of wealth that make her work relevant. It is the people, objects and geographical elements and her approach to her work, which is to represent the details of life that have aesthetic and spiritual worth beyond material wealth and the rendered, manipulated images of digital perfection that are its constant companion, that is of utmost importance when viewing her images. It just took a dose of social juxtaposition, a World Cup and an image hungry populace to attract everybody’s attention.